Has Tithing Created a Church Kleptocracy? 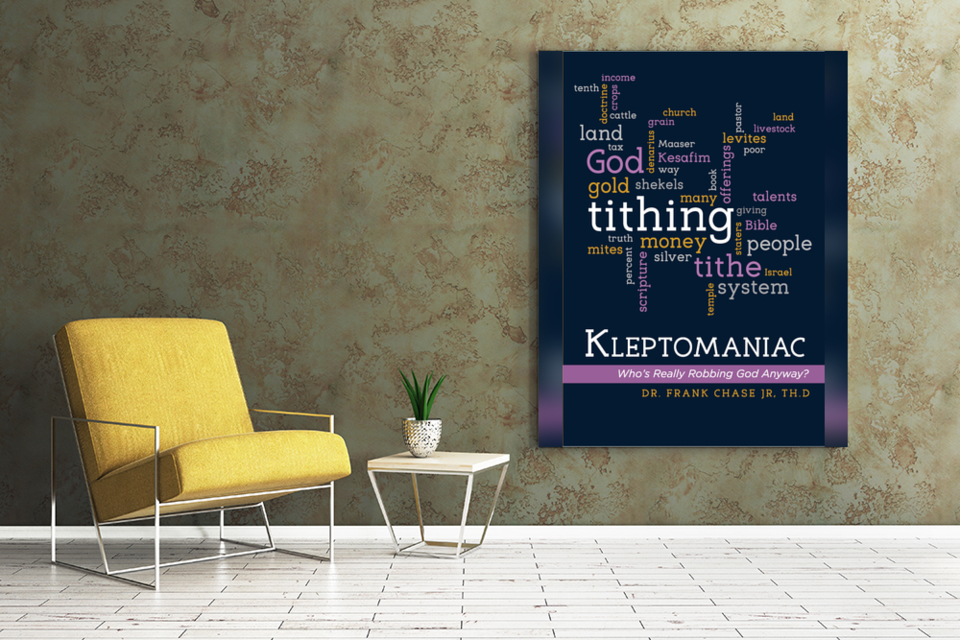 This book started out as a 117-page power point study. The research for this book became a historical and biblical analysis of modern so-called monetary tithe verses the authentic and approved biblical agricultural and livestock tithe. Journey through the power point presentation and then read more exhaustive 400 page book analysis of tithing system and how it got commuted to cold hard cash. The truth is shocking and will inform you of the truth that was hidden in plain sight.

Find more photos like this on The Book Marketing Network

This statement seems biblical and plausible; however, it is not true. When you work for money, you are selling your labor to man for a price. Therefore, you can’t produce money from your labors but you can earn money from your labor. Israel tithed from God’s labor. The Israelite farmer’s crops and animals were their farm assets not income. The farmer’s income came from the sale or barter exchange of those assets. What a farmer received from the barter exchange or sale would be the farmer’s income. The income was NOT what God wanted tithed but rather the assets (crops and livestock), which came from God’s hands as miracles. Here is an example: Fruit is not a payment or compensation. Fruit is classified as an asset because it is property, a product. The sale or exchange of the fruit would create income. There are no Scriptures showing Israel selling crops and cattle and taking the money from the sale and giving a tenth to the temple or to the Levites as a tithe. If you study every money verse in the Bible, it was never a titheable item.  For example, Joseph gave Benjamin 300 pieces of silver (Genesis 45:22). According to Genesis 47:15-17, food was used for barter only after money had run out. Banking and usury laws exist in Leviticus even before tithing. Therefore, the argument that money was not prevalent enough for everyday use is false. Yet the tithe contents from Leviticus to Luke never includes money from non-food products and trades. The only mandatory tithe in the Old Testament is eatable items (crops and livestock).

According to Scripture, tithing was mandatory only for those who owned land and grew crops and raised livestock in the Old Testament inside Israel. There are no implied or direct mandatory commands to tithe money from the Apostles in any of the Epistles. To assert that tithing money is mandatory in the New Testament is an argument from silence in the Scriptures. Tithing is mandatory in the Old Testament under the law and not mandatory under the New Testament because it was not passed down. The New Testament encourages giving from the heart as outlined by Paul in 2 Corinthians 9:7. If Paul wanted to drive home a tithing argument, his style of direct and to the point writing would have been clear because the text would possibly read: “So let each one give a tithe as God commanded.” When Paul says give what you decide in your heart, he is emphasizing freewill grace giving not percentage based giving.

Read Book excerpts from Kleptomaniac: Who’s Really Robbing God Anyway and learn some of my personal thoughts about what went into writing the book excerpts.

The author of the book, In Pursuit of The Almighty Dollar makes it clear that evangelicals wanted to expand expand the establishment of religion so that any and who decided to preach could benefit from public sector money. Beumler writes on page 10:

The plan had been to widen the establishment of religion to one in which every freeman paid a tax got to specify to which church it went (much as was the case in the late eighteenth-century states to the north) The Anglican gentry and even the Presbyterians recoiled  in horror at the notion that “any laymen, or mechanic, if he finds a motion within him from the spirit, may leap from the anvil or the plough, and in a few minutes go forth a preacher of the word of God” and be supported by publicly collected funds in pursuit of wild doctrines and disorderly gathering of the faithful.

As you can see, it appears some denominations were for anybody preaching and having access to the public money to go on the preaching circuit. Some groups wanted to control who had access to public sector money for preaching. The nasty little secret of church, tithing, government and slavery has alway been swept under the carpet of American history. And so America’s history began with some denominations competing and outmaneuvering each other for the public’s money to sustain themselves. If the competition was this cutthroat then, it is not unusual that kleptocratic methods crept into the church to enforce mandatory tithes by any means necessary to lay claim to church member resources. The disestablishment clause sent shock waves through the church and left many of them spinning their wheels on what to do next now that the government money was gone. Paying for God seems to have been a standard practice throughout history and even now monetary tithing in churches is no different. People who pay a tenth of the income to institutional church based on some alleged scriptural authority are paying for God too. The reason why the church seem comfortable in kleptocracy is that today people can have as much religion they can pay for in a society where the church has went from institutional church to consumer church. The tithe doctrine’s strength lies within the consumer church movement where mega buildings appeal to the masses and where classism exist.

Earlier in this discourse, I mentioned grace tithing as one of the new scams being used in the church. But what the Bible really teaches is grace giving from the heart as the spirit leads one to give. So the slide gives you an example of how grace tithing works in the book of Acts.

To show you how scriptural hermeneutic manipulation occurs, pastor use Apostle Paul’s own words to get you to think that he collected tithes from churches. A kleptomaniac practice they use is from II Cor. 11:8 which reads:  “I robbed other churches, taking wages from them to minister to you.” So the argument is that this verse is the smoking gun for collecting tithes. They say when Paul wrote he robbed other churches to preach freely to the Corinthians, he was talking about tithes he collected. This is total foolishness. But when you exegete the word “robbed” Paul was actually using hyperbole which is an expression speech or exaggerated statements or claims not meant to be taken literally. Paul was simple using the word to impress upon the Corinthians and prick their conscience that other churches provided him support while they provided nothing but should have provided some support. This verse is not about tithing. To prove this verse is not about tithing, Paul would have been forcing the Corinthians to break God’s Tithing laws if he refused to take their tithe. And in fact, Paul refused to accept any support and did not want to be  burden to them but chose to work his craft of tent-making to support himself and those with him on the preaching journey. In the book, Kleptomaniac: Who’s Really Robbing God Anyway you will know by the end of the book that the pro-tithe proponents have ushered the church into a kleptocracy run by many aristocratic and autocratic pastors who operate in what is now consumer christianity.

So let me conclude with a quote from Author Ernest L. Martin who wrote The Tithing Dilemma. What he say about tithing puts the nail in the coffin on mandatory tithing  and what all giving now represents. He writes on page 59:

The rules are now changed. Since tithing is not applicable for members of the Christian ekklesia, all the money (and this includes all the increase of crops and animals) belongs to the Christian who produces the income. This means 100% of his or her income still belongs to the income producer as far as God is concerned. Now some of that money will go to pay taxes (and the Bible states that taxes should be paid—Romans 13:6–7), but as far as God is concerned, 100% of the money Christians earn is theirs. This means that when a Christian gives the first 1% of income to support the work of the Gospel, that 1% is from the start reckoned as a free will offering. If one gives 5% or even 10% (or whatever one gives), it is ALL a free will offering. But with the tithing system which was in force in the Old Testament, that 1% (or more) of free will offering only started after one gave the required 10% to the Levite. But with Christians, all the support is reckoned to be free will.