What is Spirit Filled Freewill Giving? 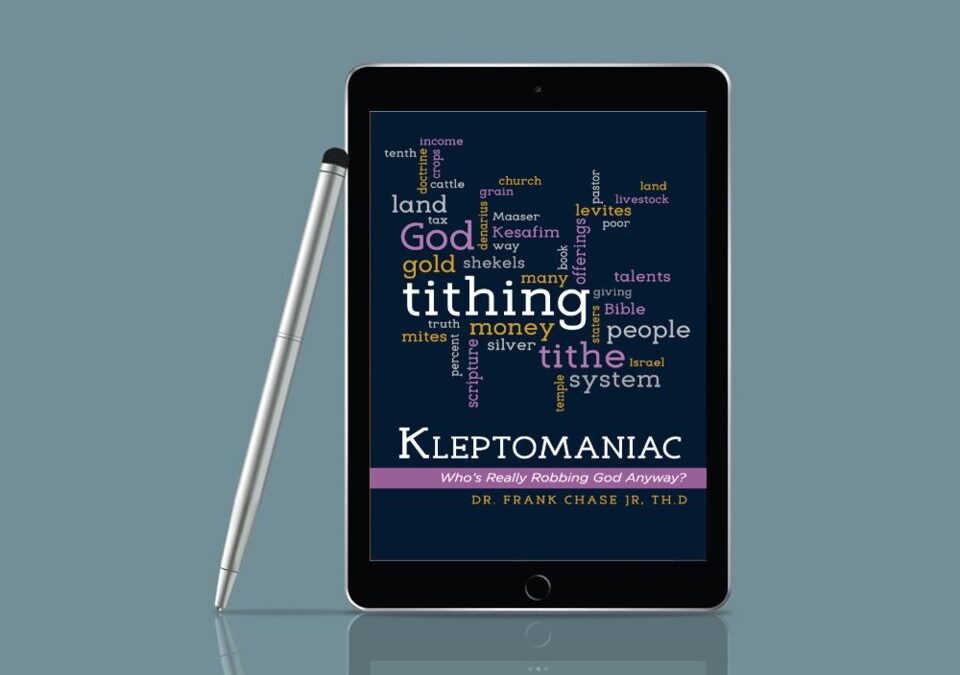 Free-will giving is spirit controlled. It is an act of love, based on what you determine in your heart to give in cooperation with the Holy Spirit.

When grace is translated from the Greek word “Charis”, it means that which brings pleasure, delight, joy, happenings, good fortune or causes favorable regard. Mandatory tithing does not produce any of these attributes, instead forced tithing produces giving out of fear. The Bible says in 2 Tim 1:7, “For God has not given us the spirit of fear…”. If you tithe money to escape a curse, you are tithing in fear. God cannot receive or bless fear money. He blesses cheerful giving not forced giving.

When we know their is a need and compassion arises in our hearts we give …this is spirit- led giving. Free-Will giving in the New Testament is based on voluntary acts not on motives for a return on investment as taught or assumed by some.

Free-Will giving is voluntary from the heart.
If tithing is required in the New Covenant, there would certainly be a strong rebuke for

not tithing in the NT, like there is in the Old Covenant, but there is no rebuke. Why? Because there was no tithing requirement and Paul never restated Malachi in the NT at all when he talked about giving, not tithing.

And the multitude of them that believed were of one heart and of one soul: neither said any of them that ought of the things which he possessed was his own; but they had all things common. 33 And with great power gave the apostles witness of the resurrection of the Lord Jesus: and great grace was upon them all. 34 Neither was there any among them that lacked: for as many as were possessors of lands or houses sold them, and brought the prices of the things that were sold, 35 And laid them down at the apostles’ feet: and distribution was made unto every man according as he had need.36 And Joses, who by the apostles was surnamed Barnabas, (which is, being interpreted, The son of consolation,) a Levite, and of the country of Cyprus, 37 Having land, sold it, and brought the money, and laid it at the apostles’ feet. KJV ( See Also Acts 2: 42-45 on next slide) Act 2:42-45 and Acts 4: 32-35d

And they continued stedfastly in the apostles’ doctrine and fellowship, and in breaking of bread, and in prayers. 43 And fear came upon every soul: and many wonders and signs were done by the apostles.44 And all that believed were together, and had all things common; 45 And sold their possessions and goods, and parted them to all men, as every man had need. KJV

Now concerning the collection for the saints, as I have given order to the churches of Galatia, even so do ye. 2 Upon the first day of the week let every one of you lay by him in store, as God hath prospered him, that there be no gatherings when I come. 3 And when I come, whomsoever ye shall approve by your letters, them will I send to bring your liberality unto Jerusalem. KJV

What is the context of this giving event?

2. This event was a special offering to be saved up weekly by the Corinthians and put aside so Paul would not have to ask for the collection when he arrived to preach to them.

3. This giving was addressing a need in Jerusalem for believers and does not address systematic giving in general.

4. Some preachers teach incorrectly that since this verse is addressing fundraising only, then is it assumed that tithing 10 percent of money was in practice for Jews and Gentiles in the church. This assumption is incorrect because the Jewish Christians would still be taking the tithes (crops and cattle) to the Temple and to the Levites. No gentile Christian would not be practicing this obligation because it was for Jews only.

5. The KJV version says “Upon the first day of the week let every one of you lay by him in store, as God hath prospered him,” The Jewish bible says, “Every week on Motza’eishabbat, (Saturday) each of you should set some money aside, according to his resources, and save it up.”

6. The intent of this context was to save up the “money” and or food somewhere based on your resources and then give it when  Paul arrived. Paul’s integrity with money was so profound, he told them to pick people they trusted to deliver the money to Jerusalem.

7. Each of them had to decide the amount they would put aside somewhere to save up. If they were saving it up then the amount was not the same for each believer every week. The text clearly teaches that each week they had the freedom to choose the amount or change the amount they saved each week according to their resources.

8. The discussion in First Corinthians 16 does not relate to local church fund-gathering except as it might apply to aid for the poor Jews in Jerusalem.

9. There was a famine in the land at the time and Paul sought help from others.

10. There is also another problem here. Does “collection” in this verse mean money? Not so fast preachers. The verse must be referred back to the book of Acts because there was a famine. So would money be part of the collection or would the collection include food too. What’s the most pressing need in a Famine, Money or Food. Let the Word teach you.

11. The word Collection in the verse means “LOGIA in the Greek and that is the word contribution. Is the contribution Paul talks about MONEY only?  Or could a contribution could be anything.

12. Paul did not define what the contents of the collection was. Why? His audience knew what he was talking about. It is us who interpret and who make the mistake to conclude it is only cold hard cash in the verse. But is this verse talking about money only? Maybe or maybe not.

13. Paul is not and Paul did NOT say “On the first day of every week let each one of you bring your tithes and offerings for the local church budget.” Such manipulation of the text ignores its context of the verse. Russell Kelly pg 202.

14. The context “everyone laying by him in store” could be a consideration of those giving who were less well off. That way they could give even if it were little. There is no set amount in this verse to teach tithing.

15. The text suggests that they put aside week to week according to their ability not proportionately.

16 .The true biblical tithe was a specified amount (10th Part) from a specified source (food stuff, crops and animals).

17. The context of the verse says the collection for the saints, not for the building mortgage, the pastor, or the apostle.

18. There was a famine in the land at the time and Paul sought help from other believers. See Acts 11: 27-30 so would food or money be more important at this time in a famine.

19. Each believer kept the weekly contribution at home until Paul arrived and collected the collection. 19. Since a tithe means tenth part and not ten percent, studying Israel’s giving shows that tithing was not equal across the board 10 percent. See item 20 for an example.

21. This scripture cannot be used legitimately for teaching tithes or offerings for two reasons. One, the context of the text does not address the mode of their regular giving or how they gave, whether weekly or monthly. This text only addresses a special collection. Two. Paul does not mention giving 10 percent of income as a regular money tithe in this text. If a Pastor uses this text to mandate tithing or offering, he is committing unethical exegesis.

Though the text is talking strictly about emergency relief efforts for Jerusalem there is insight into general giving habits that could be suggested for Modern Day Churches with legitimate needs.

A. Giving should be done regularly, Paul tells them to set aside on the first day of the week. It’s easier to give small amounts weekly than larger amounts on a monthly or even a yearly basis.

B. Giving should be proportionate in keeping with income as God Prospers you and considering expenses People who make more give more, people who make less give less. Giving is not based on percentage. That’s why Paul did not specify a percentage or suggest one from the TORAH.

C. Every believer is to give something by stating “everyone of you”. The amount is left up to the giver in the text. Source You Mean I Don’t Have to Tithe, David Croteau Pages 245, 146. No Tithing Commandment Can Be Assumed From These Verses

Tithing Under the Priesthoods

The context of 2 Cor. Chapter  8 is Sha’ul asking the Corinthians to complete or finish their relief efforts they promised a year earlier.  He said he was not asking them to complete their giving by commandment. It was optional. Why do NT Pastor issues commands to give when Paul did not but wanted an authentic gift given in willingness and not something extracted by pressure.

If there is not a sincere desire willingness, or eagerness, keep the money in your pocket because God cannot bless it. 

All giving should be based on what a man has and not on what they did not have. You may have heard it preached (explicitly or implicitly) from a pulpit The Paul teaches 10% but you will not hear it from the Word of God! And guess whose words count at the end ?! , Paul’s, “Out of what you have” means “according to what you have”and so that there are no misunderstandings, Paul makes it clear: “not according to what you don’t have”

The giving here is out of surplus (After satisfying obligations 1Tim 5: 7-8 A commandment) among the believers. Paul had no intention to help the poor in Jerusalem by making the Corinthians poor! He had no thought at all of burdening the one to ease the other! They would help, out of their abundance. It was this abundance that would supply the lack of the poor saints in Jerusalem at this time, so that the abundance of these, now poor, saints could supply the Corinthians’ lack in another time. TITHING, GIVING AND THE NEW TESTAMENT by Anastasios Kioulachoglou pages 25-26

In verse 8, Sha’ul clarified that he was not commanding them to give. Question?  Why do some pastors command people to give and even give 10 percent of their gross income when Paul strictly said there must be a willing mind first to be able give in love. If the gift is not Willing, it is not acceptable to God.