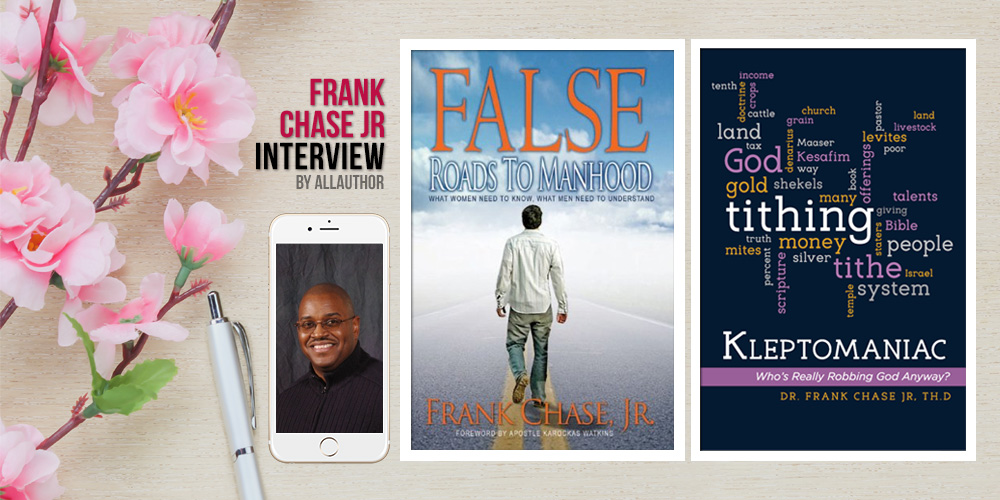 Author and former military man Frank Chase Jr. grew in Baltimore, MD. He got interested in writing from watching movies and listening to a radio show called mystery theatre, but it was only in his thirties after a divorce that his desire to write escalated. His debut book “False Roads to Manhood: What Women Need to Know: What Men Need to Understand” took him seven years of research and writing. If he weren’t a writer, Frank would be a stage actor as it has been his passion since high school.Being a writer has taught him that everyone will not agree with you or what you may write, but it leaves a record and a legacy that can help future generations long after you have passed on. He is currently writing a scripture-centered book and also plans on writing a fiction novel soon. Read full interview…

Thanks Daniel White for Joining the tithe converation.

In my previous post, we continued answering questions from the pamphlet titled, In God We Trust? Amazing Fact tithing pamphlet.  In this post, I will continue to break down the erroneous questions and give you what the Bible really says about tithing. We will start with question 12, which is a loaded question that assumes tithing as practiced today is a foregone conclusion, but the opposite is true. Tithing today has no resemblance in form, fit and function to the tithe of the Bible. My book, Kleptomaniac: Who’s Really Robbing God Anyway? has many more answers to the questions this pamphlet provides. You can get signed paperbacks, just order Kleptomaniac: Who’s Really Robbing God Anyway? from Paypalme for $23.87

Question 12 reads: In addition to the tithe, which belongs to God, what else does God ask of his people? The pamphlet cites Psalm 96:8, which reads, “Bring an offering and come into His Courts.” Then the answer the pamphlet gives is this: The Lord asks up to give offerings of His work as an expression of our love for him and our thanksgiving for his blessings.

My Answer:  The first part of the question is incorrect because it assumes the tithe is money and because of that  we are to bring some additional besides the tithe. In fact, God does not ask New Testament believers to tithe crops and cattle and assuming money is a tithe is simply out of context with scripture. Though the verse seems to ask for offerings, it is speaking of the temple, not the New Testament Ekklesia. An offering is not something that’s in addition to tithing, an offering in the New Covenant comes from the heart. It is false scripture twisting to say that an offering is only accepted after you have paid your tithe. There is not Bible verse to back up such an outlandish unbiblical statement. The standard of giving for the followers of the Messiah is free will generous giving that comes from the heart a person who has it to give. Here is what the Bible says to those who are givers. “For if there be first willing mind, it is accepted according to that a man hath and not according to that he hath not” ( 1 Cor. 8:12 KJV). Then Paul went on to say that all giving be on the basis of “every man according as he purposeth in his heart, so let him give; not grudgingly or of necessity, for God loveth a cheerful giver” (2 Cor 9:7). There is no such phenomenon that offerings are given in addition to the tithe.

Question 13 reads: How much shall I give to God as offerings? The pamphlet cites 2 Cor 9:7 and gives this answer: The Bible does not specify a set amount for offerings. Each person decides (as God impresses) how much to give and then gives it cheerfully.

My Answer: For question 13, we, in fact, have a correct answer. All giving comes from a cheerful heart. My answer to question 12 answers question 13.  There is no such thing as New Covenant or New Testament tithing.

Question 14 asks, What additional Bible principles does God share with us regarding giving?  The amazing facts pamphlet gives a list of answers:

After listing all these scripture references, the Pamphlet then states, we return the tithe to God, to whom it already belongs. We give offerings. Offerings are voluntary and should be given Joyously.

My answer:  The common practice of stringing together scriptures to prove a point is often used to prove tithing. So the pamphlet asks a question then gives a list of scripture answers on giving then finalizes it by saying we return the tithe to God and give voluntary offerings. The problem with the list of these verses is that each verse has a specific context, which the pamphlet leaves out. None the references address how regular giving was done in the New Testament Church in the first century. Actually, neither Paul or the New Testament address specific giving principles that was common in the first century among the community of believers. On many occasions, Paul addressed giving with reference to helping poor believers who were in some struggle. The New Testament does not really address weekly giving practices and what giving principles should be followed. Many of our giving scenarios and practices are based on current cultural practices and the influences of the IRS as it pertains to charitable giving under the guidance of the 501c3 tax code and the laws of the Old Testament. None of these verses in letters A-H addresses regular giving, but they are used out of context to buttress the tithing argument through the process of homiletics where one uses verses with a similar subject to bolster a larger doctrinal position even though the verse themselves have no  direct correlation  to each other.  You must also keep in mind that a principle is not a command to do something. We are charged to obey commandments, not principles because a principle is not a commandment. The unspoken argument of all of these verses is that money is the driving force behind each verse. I would study each one of the scripture references separately and in context to find out what the real message is, and I guarantee that it won’t be about money for the church.
Check out new video book trailer for Kleptomaniac Who Really Robbing God Anyway?